What do YOU Know About American Chestnut Tree Restoration?

Question– Is an American Chestnut tree growing on BRNP property?

Answers at end of article.

Looking for a botanically-focused venture, this past June 2016, I volunteered for a week-long annual inoculation project at The American Chestnut Foundation (TACF) Research Farm through the Roads Scholar Program. Having read numerous articles ranging from newspapers to journals, I arrived in Meadowview, Virginia, naïvely thinking I knew a lot about the plight of the American Chestnut. Not so much, it turned out.

After a brief introductory session, the volunteers were turned over to the Research Farm’s lead scientist, Dr. Laura Georgi. For the next five days Dr. Georgi lectured, instructed, tutored, demonstrated, illustrated—motivating us to learn about almost every aspect of the chestnut species. During the course of the week our learning environments ranged from a class setting to the research farm’s laboratory to the orchard fields. I gained direct knowledge by performing field work in the Meadowview orchards. I learned first-hand how to identify the various symptoms of the blight’s infections; developed a detailed understanding of the pathology of the fungus; and learned to differentiate taxonomically the hybridized tree generations produced in the backbreeding projects. In the Farm’s laboratory, Dr. Georgi provided a rudimentary introduction into the genetics of crossbreeding as practiced by TACF (intrabreeding), and a working level tour through the lab’s procedures and techniques in germinating nuts to grow approximately 5000 seedlings per year.

It is rather common knowledge in botany-centric worlds, that the accidental introduction of the fungus (Cryphonectria parasitica), devastated the American Chestnut tree (Castanea dentata), the penultimate foundation species to grow in the eastern North American forests (1-1.5 billion trees). By the end of WWII, in slightly over 50 years, the great American Chestnut was reduced to a few standing survivors and even now these more immune exotic specimens continue to succumb to the blight. Less known is that although the fungus destroys the aboveground stems, it does not attack the root systems which are protected by the soils. This is a fortunate factor in an otherwise total ecological disaster, as the blight did not cause full extinction of C. dentata. The fungus does however cause the extirpation of the tree’s physiology out of the forest canopy, resulting in the chestnut being functionally extinct.

Recent research,[1] designed around and based on the enhanced version of the U.S. Dept. of Agriculture’s Forest Inventory and Analysis (FIA) program[2] where sampling was compiled by states’ forestry evaluation groups, estimates roughly 431 million (error ±30.2 million) C. dentata stems (stem, sapling, or tree). This population equals less than 10% of pre-blight population in its historical range. Distributed across the 16 core-range states, 70.9 million live trees (>2.5 cm dbh) are estimated to exist. That the vast majority (84%) of the stems inventoried in the FIA are seedlings (< 2.5 cm dbh) illustrates the greatly diminished structure of the surviving stock.

Since the blight was discovered, various groups have attempted either to eradicate the fungus or to develop resistant trees; this latter option considered the most viable in terms of success. Hypovirulence control, inter/intra breeding, and genetic engineering are the three main approaches practiced by restoration efforts. Recently the breeding programs and the genetic engineering techniques are experiencing broader support and probability of success in chestnut tree restoration.

TACF is one of the larger national restoration organizations. See box below. The TACF pursues the traditional inter/intra-breeding approaches to developing an immune hybrid tree that is 95% American. The TACF Research Farm is located in Meadowview, with three large local orchards and another remote orchard at Matthews State Forest near Galax. These properties contain approximately 50,000 trees, sprouts, and seedlings planted as stock for their backbreeding program headquartered and operated in a Virginia Dept. of Forestry certified laboratory. With only four staffed positions, the Meadowview backbreeding programs are highly dependent upon volunteers and citizen scientists to perform hands-on tasks during the critical spring and fall months when the chestnut trees are in their annual growth stages. 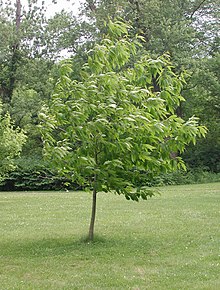 Meanwhile back on the farm, er, in the orchards that is, with nine other Roads Scholars, we worked up to eight hours per day performing inoculations of over 2000 trees. Yes, we were intentional infecting trees with the fungus! Inoculations are performed on 3- to 5-year-old trees to determine each plant’s susceptibility to the fungus. Of the 2000 tree we treated with the fungus, the survival rate will probably be 5 or 6 trees. American chestnut tree immunity to the fungus is a very low percentage condition enabled by a genetic mutation from cross breeding.

After limited early success, much progress is being achieved in producing a blight resistant tree, especially in the past 10 years. Advances in breeding techniques and procedures have been greatly enhanced through the contributions of biochemical analysis and mapping of the chestnut genome by genetic engineers. Aided by these scientific disciplines, one can perceive within the chestnut groups a change of attitude from one of dogged determination working against an overwhelming foe to one of confidence based on intelligent information. Conservation literature is beginning to address the pragmatic environmental impacts of repopulation dynamics of the chestnut tree on the current forest biome.

After a brief—but intense— indoctrination into the Chestnut tree and its blight I cannot claim to be naïve any longer. But based on my experience in Meadowview, I must humbly admit that even more than before, my level of knowledge remains “Not so much—still.”

However, I more fully comprehend the scope of the task of the TACF and related organizations with their goal of forestland restoration. More importantly, I understand the vital importance of the role and the dedication of volunteers necessary to support the mission of restoring the mighty Chestnut tree.

[1] Dalgleish,H.J.; Nelson,C.D.; Scrivani,J.A.; Jacobs,D.F. Consequences of Shifts in Abundance and Distribution of American Chestnut for Restoration of a Foundation Tree. Reprinted from Forests (ISSN 1999-4907) in Chestnut, The Journal of The American Chestnut Foundation, Issue 2, Vol. 30, Spring 2016.

The mission of The American Chestnut Foundation (TACF) is to restore the American chestnut tree to our eastern woodlands to benefit our environment, our wildlife, and our society.

The American Chestnut Foundation has a Tree Locator project that encourages identification and verification of native or wild specimens of C. dentata. To assist and standardize the inventory efforts TACF maintains an online reporting site: acf.org/find_a_tree.php.

Sign up for projects, report volunteer and CE hours and view your hour reports.

Applications will open in Spring 2022. If you have questions about the organization, please email us at vmnbansheereeks@gmail.com.